Illustrated Journal of Our Caravan Trip from Melbourne to Cairns and Back During July, August and September of 2016
Written by Bill Leithhead, Melbourne, Australia 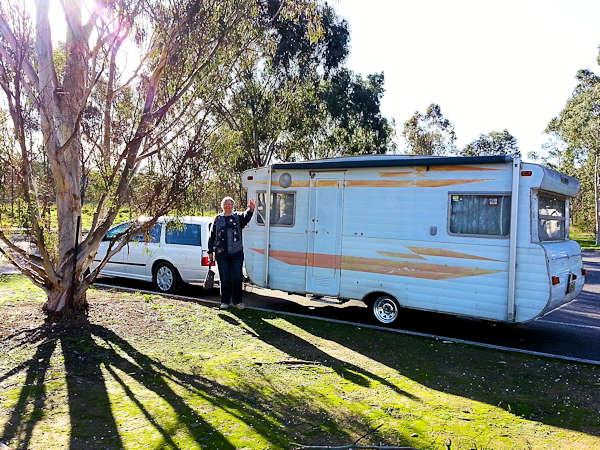 Glenyce, highlighted by the wintery sunlight at our roadhouse lunch stop LH float
Well, after final packing, Glenyce and I managed to get out of the driveway in Glen Waverley by 12:30 pm, via the Monash Freeway, up through the centre of Melbourne, via the Bolte Bridge, with the tall buildings of Melbourne close by. We were looking forward to many, many days of travel through the fields and paddocks of this beautiful country of ours, Australia.

Once on the Hume Highway, we more or less flew along the freeway, surrounded by the gum trees we love so well, and broad stretches of agricultural land. We stoppped at a large road-house about halfway, and refuelled and sat down to a bought lunch. After travelling 250km, we checked in at Wangaratta Caravan Park, then set up the usual connections for power, water supply, and sullage pipe from the sink, and went to visit Ron and Mary Hammersley, Glenyce's brother and sister-in-law.

We had a long, long chat, and a most enjoyable dinner. They have had many years of such travel up and down to Cairns, and have done the around-Australia trip and much other such travelling, very often, especially over the Victorian winter months. It was they who encouraged Glenyce and me, accompanied by our three young children, in their primary school years, to drive up to Cairns and back, taking advantage of my accumulated long-service leave of approximately eight weeks. I was grateful that I had such good conditions of employment in my job as a Senior Lecturer in Organic Chemistry at the Royal Melbourne Institiute of Technology, which I held from 1964 to 1989.

Our children fondly remember that caravan trip to Cairns, in 1979, seeing innumerable country towns and cities, up to Cairns and back, having adventures such as driving up through the Cape Tribulation rain-forests during one long day, driving our station wagon over that marvellous road, then far from well-developed.

They do recall that I stalled the engine during a river crossing, whereupon water seeped in through the car door seals, and I had to take all of the flooring out to dry, back at the caravan park. 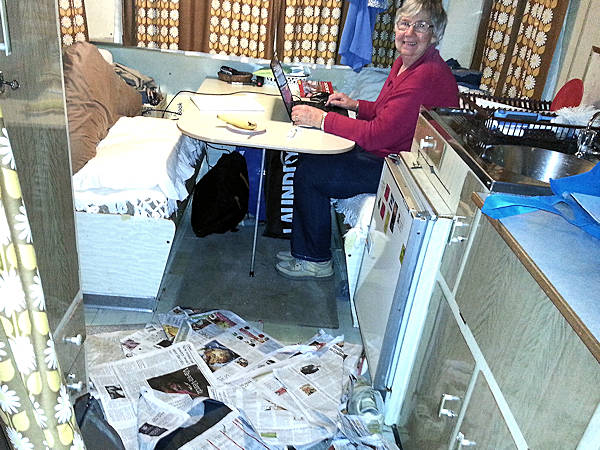 We very often have to spread newspapers in the van to minimize the mud inside. 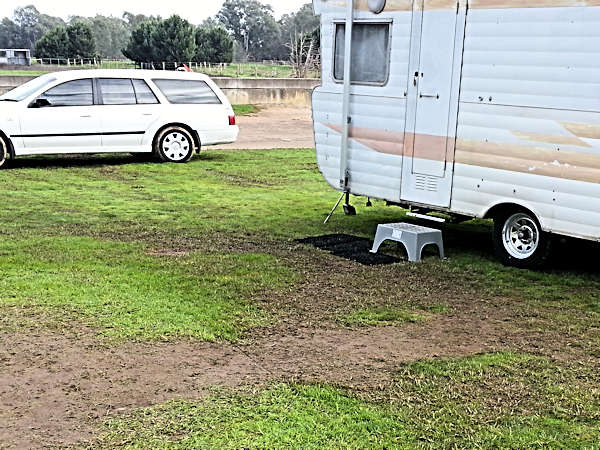 Wangaratta Caravan Park had a lot of muddy ground around our caravan.
I am not intending to be that adventurous for this trip. But this trip to Cairns, which ultimately involved 9,000 km travelled in 10 weeks, was intended to be probably the last of our long trips, owing to the slow but definitely perceptible reduction of the level of our health and energy.

Bluntly, we are feeling our age, (both 78/9), and both of us are afflicted with major arthritis in the lumbar region. That needs regular use of panadol/codeine, plus Lyrica to control the pattern of unpleasant sensations in the lower legs and feet loosely called "sciatica". I've had it for 18 years, and Glenyce a shorter time than that.

As well, Glenyce has been diagnosed with peripheral neuropathy, which means additional unpleasant sensations in her lower legs and feet which she experiences as her "dead feeling", and results in a sensation of not being in control of her balance, and needing for support from me, or bannisters, or nearby trees, or whatever works, when this unpredictably hits her.

It's a proprioception problem (if you want to look it up). It's just a genetically disposed part of the ageing process. Everyone gets these sorts of things, but I was feeling that I would like to do one last long trip before it all gets too hard.

As well, I have never travelled very much in Far North Queensland, and wanted to fill in some gaps. As it happens, we did manage that quite well. But sometime in the future, we'd like to fly up and spend more time actually on the reef, because we didn't quite manage that as well as we would have liked. 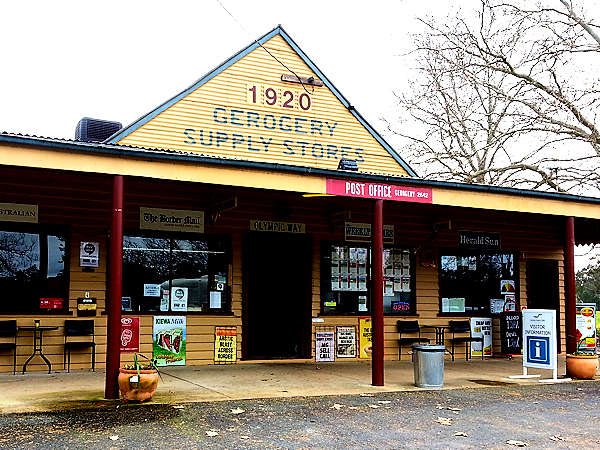 We slept in a little after a good night's sleep, punctuated only by a solid thump during the night, which turned out to be Glenyce, whom I found on the floor of the van, in between our two single beds.

Glenyce had become tightly tangled in her bedding and inside her twisted sleeping bag. She was blinking rather non-comprehendingly, not quite awake - well it was in the "small hours" of the morning! She was un-hurt, and after some help from me, managed to climb out, remake her bed, and insert herself into her snug sleeping bag. She's never done that before!

Having travelled 250km north-east from Melbourne, today we aimed to strike out up the Hume Highway to Albury, and make our way onto the main NSW inland highway, the Newell Highway, somewhere near Forbes. As it turned out, we made slower progress, and only got to West Wyalong.

In no time at all, 50km further north-east along the well-manicured Hume Highway, we crossed the Murray at the major twin town complex of Wodonga (in Victoria) and Albury (in New South Wales). This used to be a major hassle, with internal town roads choked up by traffic - especially the thousands of semi-trailers which use the Hume. But now the towns are by-passed by the newer freeway, and it's easy-peasy.

From Albury there are a variety of routes whereby to link up with the Newell Hwy. So we criss-crossed using smaller roads, driving through beautifully green, open pastoral land. Some 50km from Wangaratta, we topped up the fuel tank at Gerogery (possibly comes from aboriginal words sounding like "jerro-jerro-ee"). This is a beautifully-maintained typical old "general store", of a type found throughout this Australian homeland of ours.

How do you pronounce Gerogery? In that link, you can hear it pronounced, in many different languages! Actually, the whole pronounced sentence in this novelty site is: "Gerogery railway station, New South Wales".

Much later on, having travelled 240km so far today, we chanced upon the township of Coolamon - a place that neither of us ever remember passing through in previous travels. We were looking for some lunch, and passed by a magnificent old double-storied fully-verandered old hotel. Mysteriously labelled "New Hotel", prefixed onto the main title of "Hotel Coolamon", this is oustandingly well-maintained, and, again, is characteristic of many, many such buildings servicing the population of country Australia. 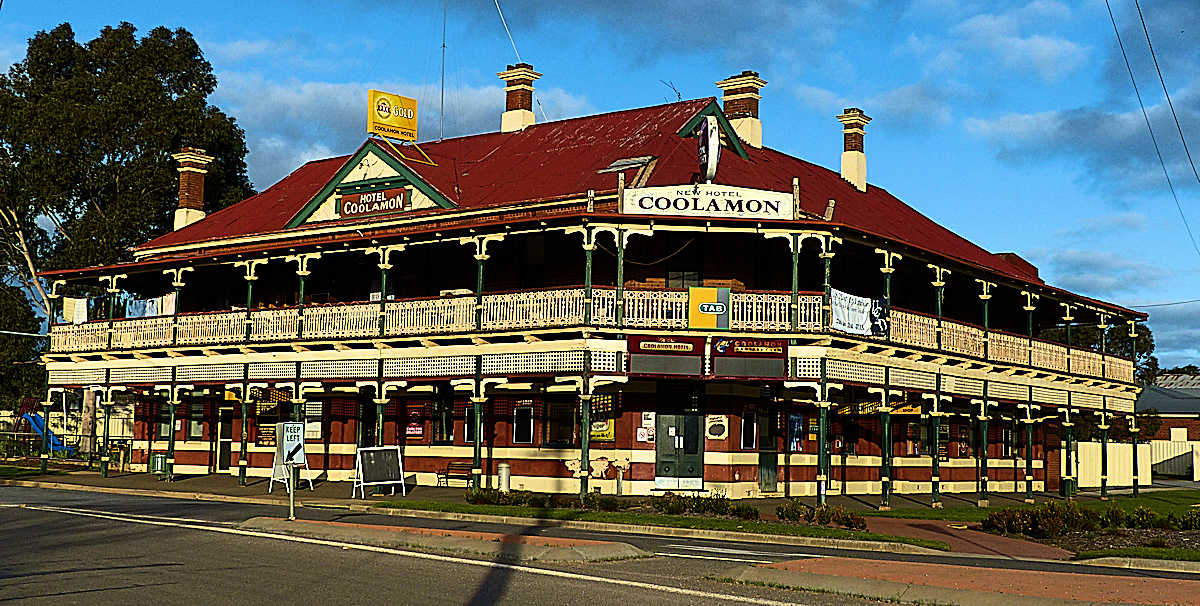 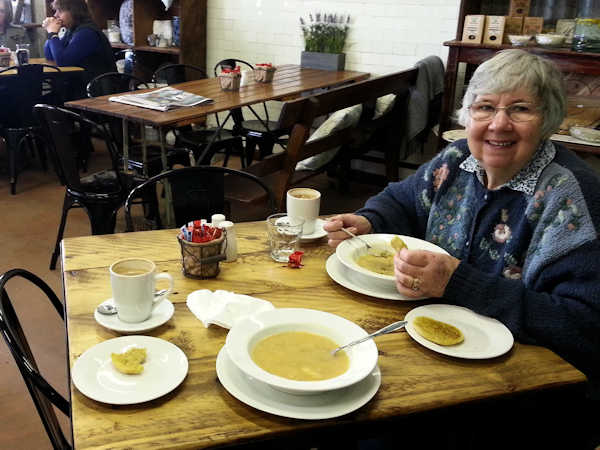 Glenyce enjoying her soup and bread at a cafe in the main street of Coolamon, NSW


As it happened, we chose to eat at a small cafe in the main street. The soup and rolls were deliciously filling!

Mine is getting cold while I do the photography!! 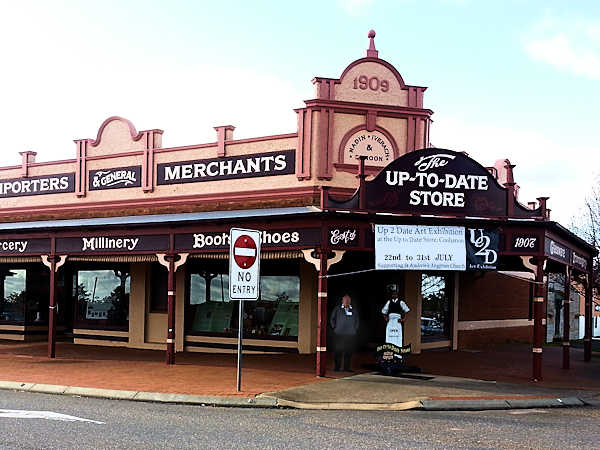 First established in 1909, the uniquely-named "Up-to-date Store", located near the top of the main street of Coolamon, NSW, is a treasure trove of preserved objects associated with agriculture and commerce from years gone by. 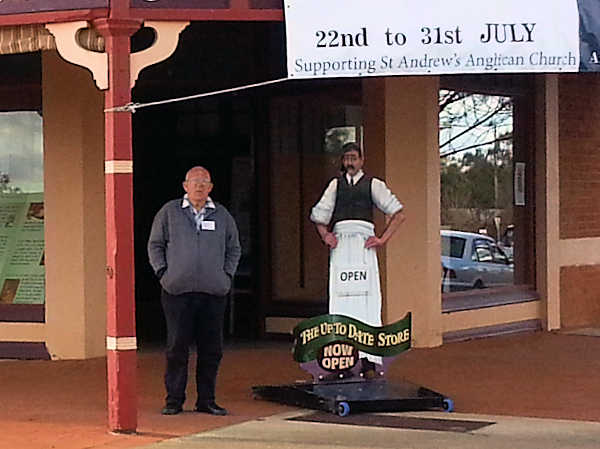 Local resident Brian Holden stands hopefully waiting for customers in front of his pride and joy, the outstanding, unusual collation of equipment and objects from farming and activities of daily life from the beginning of the 20th century, including an RSL-based war museum emphasizing the role played by the men and women of this district. He generously gave us his time to explain what it all means, and how the towns-folk of Coolamon and district played their role in the life of this nation.
Little did we know that waiting in the main street, just across from our cafe, was a fine gentleman called Brian Holden, who was out in front of the quaintly-named "Up To Date Store", dated 1909, drumming up business. Little did we know that owing to this chance meeting with him, we were to enter into his store-front, only to discover that it is a veritable "Aladdin's Cave" of historical goodies. And so for the next hour and a half or so, he guided Glenyce and myself around Coolamon's wonderful historical museum, which is full of unique, captivating items, large and small, from a bygone era.

,The "Up-to-Date Store" exhibition in Coolamon contains so much interesting historical material that it deserves to be displayed in a completely separate web page in my Web Space. I intend to complete such a display as soon as it can be done. A link to that and other specialized treatments of material gathered from special places from our Cairns 2016 will be set up as soon as it can be done. 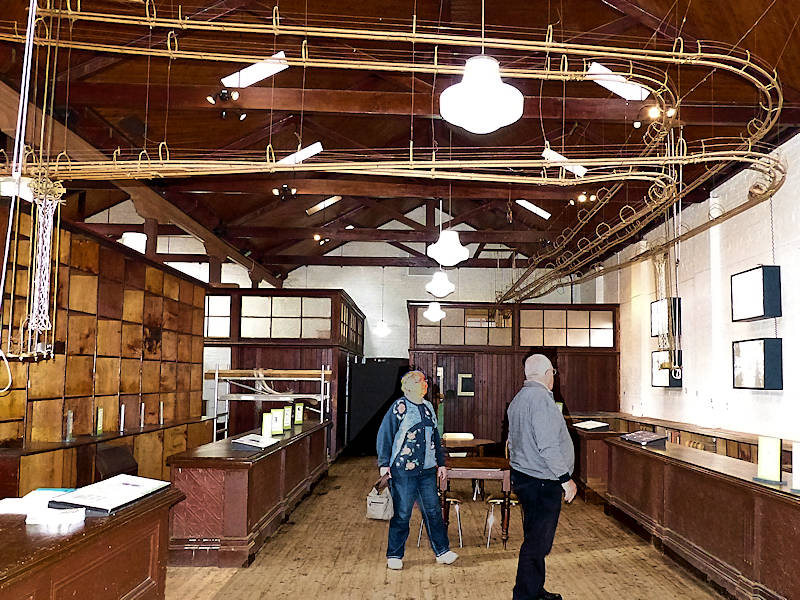 Glenyce and Brian Holden in the first main room of the "Up-to-Date Store" in Coolamon, NSW


Glenyce is standing with our guide, Brian, inside the first room of the old shop, where the box-like shelves which held the goods can be seen. close to the ceiling can be seen the complicated series of wooden tracks and other parts making up a system tyhat was used for sending cash and invoices up to the secure accounts office in the far right-hand side of the room.

Those things were enclosed inside a hollow ball which, under the force of gravity, rolled along the wooden tracks. and from that accounts office, the change and the receipt were placed inside the ball, and it would roll along by gravity back to the original counter. This whole device is called the Lamson cash ball system and is an example of a cash railway system, which were used widely around the world in earlier years of the 20th century.


But by the time we emerged from the large museum displays that Brian had shown us, it was past four o'clock and we still had to find some place to sleep! So we quickly took to the road into the gathering twilight. 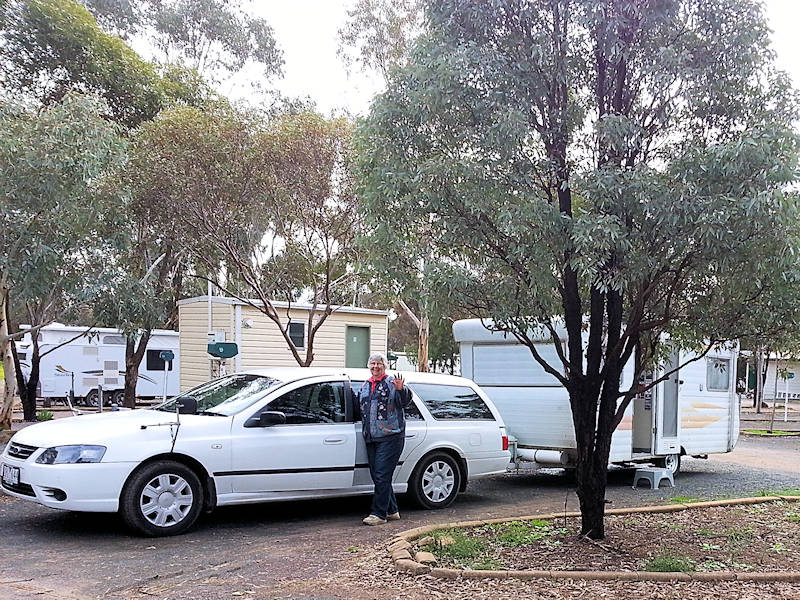 Our car & van with Glenyce at our sleeping place, West Wyalong. 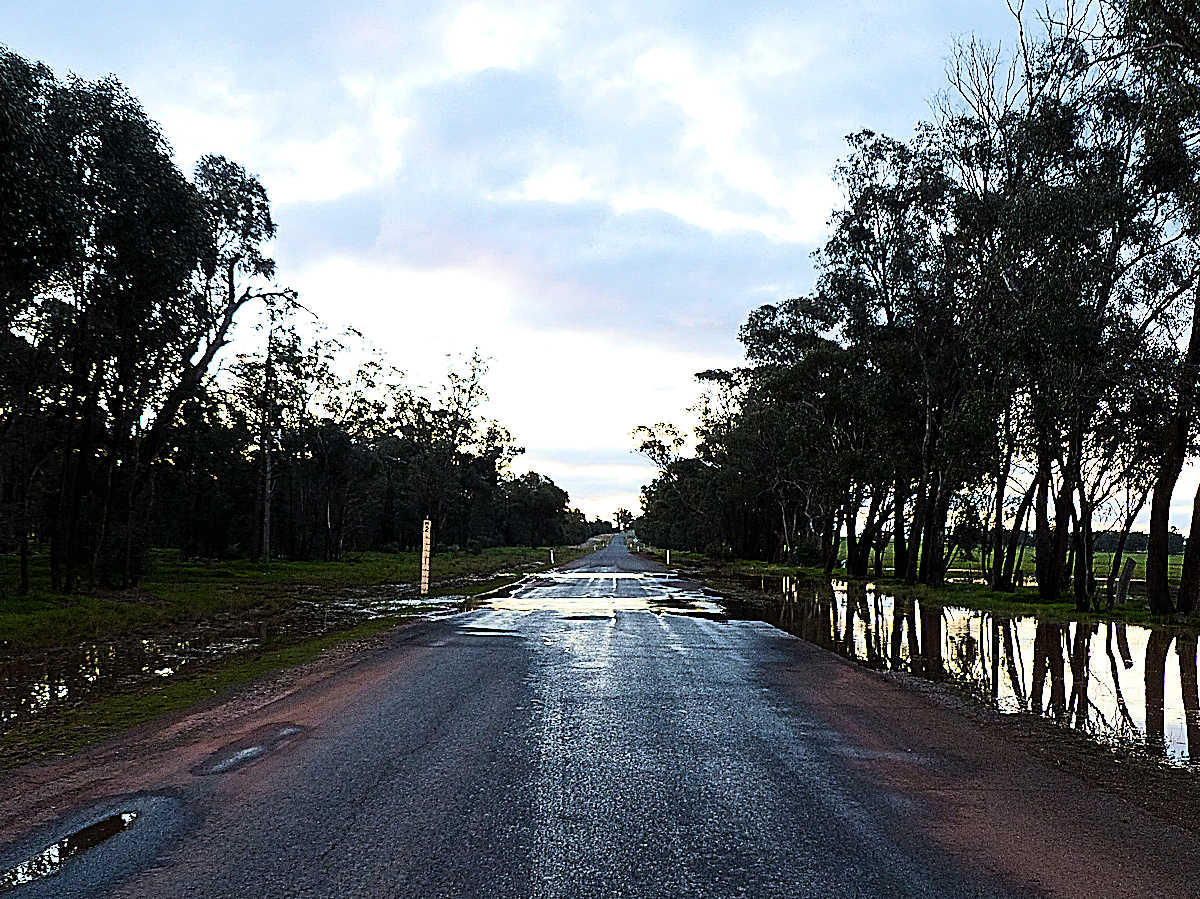 Driving at dusk along a flooded road somewhere near Coolamon, NSW
And so, late in the day, we had to find our way along a maze of small country roads until we found a caravan site at West Wyalong. We hadn't booked ahead, and were a little nervous about that. But, as it turned out, we needn't have worried, because they were quite a few powered caravan sites when we breezed into the van park.

We had taken a lot of photos inside the museum at Coolamon. These had to nbe downloade into the laptop and checkout. I also had to write a blog and deal with emails and so on.

We both discovered that, on the second day of our trip, fatigue was setting in and would continue to curtail the amount of such activity that we could do. The fatigue factor turned out to be a major burden that we both experienced. The advance of years was starting to make its mark!! 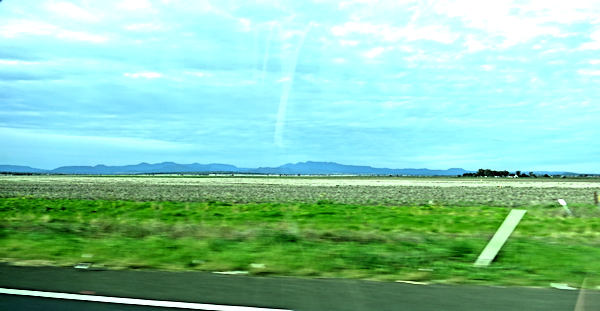 Country-side as we whiz along at 100 km/h, photographed by Glenyce from her passenger seat.

Wide, wide landscape north of Gilgandra, as photographed by Glenyce sideways from her passenger seat, at about 100 km/h.
Racing car on a semitrailer.


Seen by us on a large trailer in front, along the road - a racing car, belonging to a business in Goondawindi, which is just over the Queensland border. I do believe that from the flashing light located at the right, it could possibly also be a "pace car", needed to slow the racing drivers until the track is cleared after an incident. Indicative of the range of activities in which country people are involved, and the distances needed for travel to leisure activities and sport. 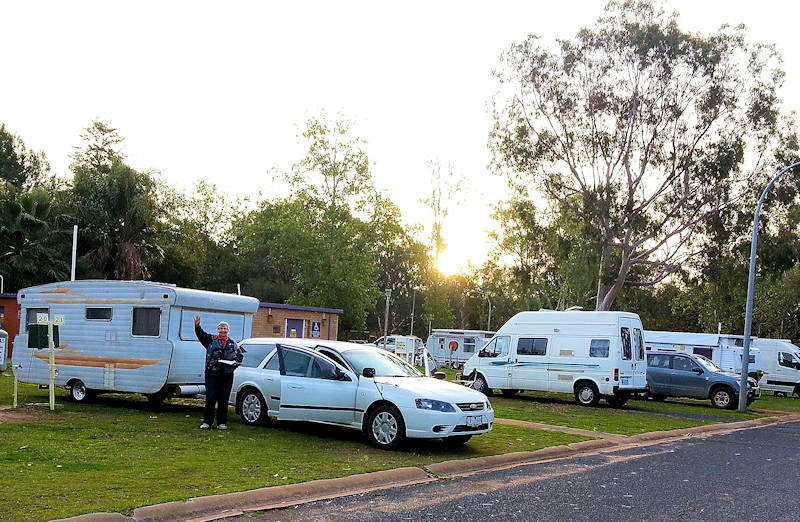 Our rig at Gilgandra for the overnight stop.

Glenyce with our car and van at a caravan park in Gilgandra. We had an excellent night's sleep before pushing on to our next stop at Moree, in the Gwydir Carapark, which is a caravan park with all those nice heated artesian pools.