The caravan is a Viscount Ambassador, bought by my father in about 1967, and now regarded as a vintage caravan, with a club following. Even for just the two of us, it takes a lot of effort to fit our stuff in, and to work around each other in the cramped confines of the floor space. Here are some more or less random shots I’ve taken on our way from Melbourne up to Cairns.

Taken from between our beds, a view of Glenyce cooking in the kitchen, on the gas stove, accessed by sliding across the bench top. This bench top was originally chip-board, but over the years it started to disintegrate, and finally collapsed when we were in Merimbula, NSW. We found that a workshop in nearby Eden was prepared to manufacture a new, better one for us within a day or so. That was lucky, and we are grateful for their kindness. 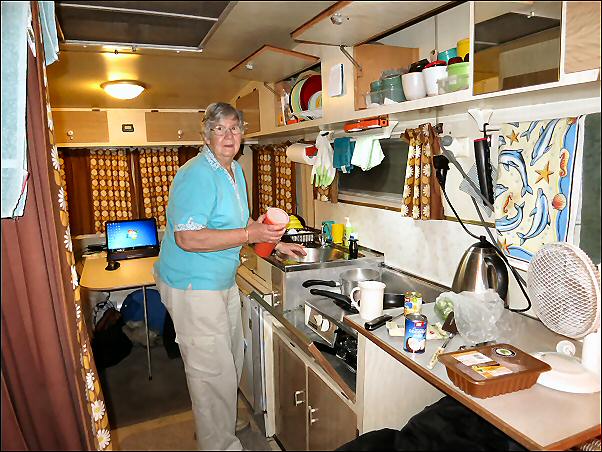 General view taken from the kitchen table, viewing the kitchen bench (not extended), with storage for plastic crockery, and cups and mugs and some foodstuffs, and my bed with a light over it (Glenyce seated on it). The bed – not the light. 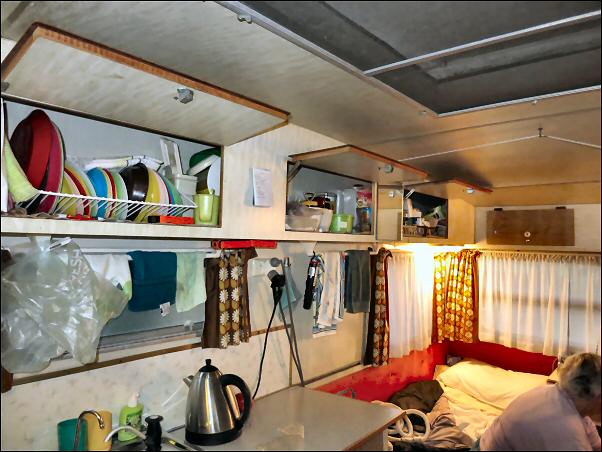 Inside the refrigerator, which is the original one, from about 1967, and is quite small. To replace it with a modern one would require very extensive remodelling of the interior, which is not justified. We only ever run it on electricity, and just keep it closed on trips in between stops. It can run on gas, but that requires the pilot light to be extinguished when we refuel. In fact, it might even be illegal, or voiding the insurance to travel with it on. I’m not sure. We NEVER use the van without being on power, anyway. That’s for refrigeration, heating or fan, and electric blankets for back pain. And of course, for the laptop and cameras and phone recharging. 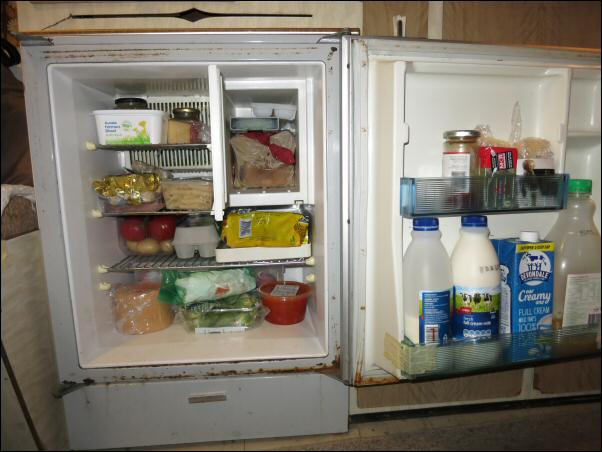 This is my drawer with underpants, socks, handkerchiefs, electric razor, a jumper, some medications, etc. For this long trip I packed 8 each of pairs of socks and underpants. And about 12 shirts, and 5-6 pairs of trousers. Things get grubby on the road, and we might not wash clothes all that often. It varies, and we’ve been lucky so far. The facilities in modern caravan parks are pretty good. 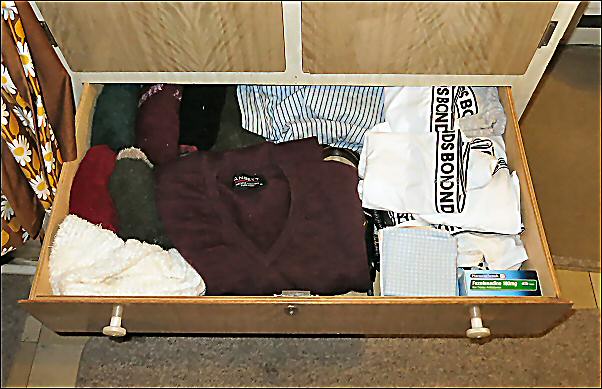 The main wardrobe is pretty full because we need clothes to last over a week, in case we can’t get washing done and dried. The above-listed supply of clothing can be seen in the wardrobe. The rod has been stable for many years, and usually holds up. But not this time! When we arrived at Lightning Ridge, the rod had come out of its holders, and all of the clothes collapsed into a heap. But some deft work with a screwdriver and rolling the rod underneath Glenyce’s feet straightened the rod up reasonably well, and we hope it will be OK for years to come! Or maybe I had better get a length of new rod when we get home. Or even in Cairns – it’s a big city! 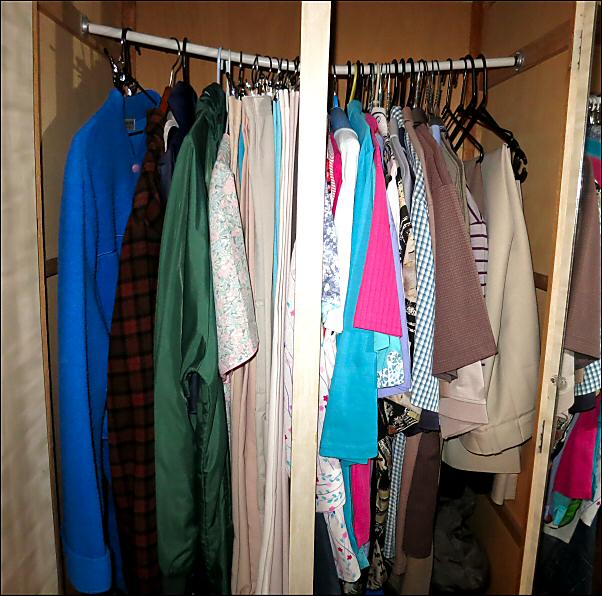 Here’s Glenyce reorganizing her packing of medications, and socks, etc. We each take a variety lot of prescription medication, and made sure we have a forward supply of enough of everything to last about 8-10 weeks. We’ve seen our GP, who has printed out a list of prescriptions and the disorders for which they are prescribed. This will make it easier for getting new scripts if we run out.

This is my main drawer with many of my prescriptions, plus Beconase, and other over the counter things, plus odds and ends like a selection of pens and pencils, erasers, nail files, scissors, etc. 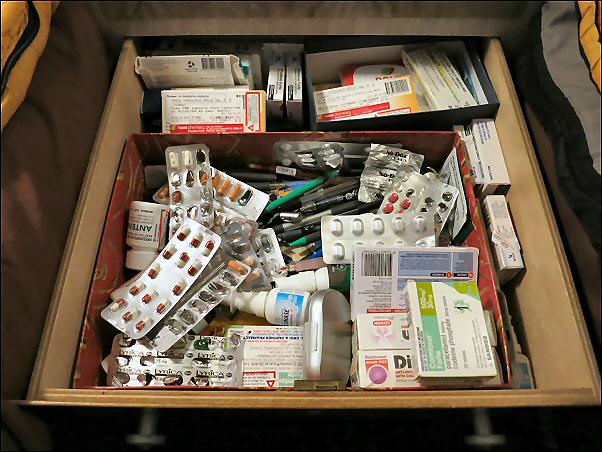 Here I’ve contrived an arrangement of two power boards which feed the rechargers for 3 different cameras, the Samsung Galaxy S3 phone, a spare phone battery, the  6″ Tom-Tom navigator, a Comsol 7800 mAh spare power battery, a charger for a pair of Uniden 5W walkie-talkies, etc. Oh – and a powered USB hub  with 7 sockets (4 USB 3.0 and 3 USB 2.0). Sheesh – what a tangle! 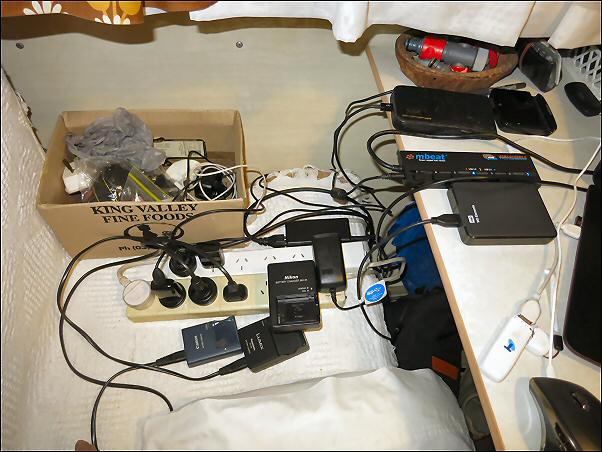 A wider shot of the previous junk doing those various tasks which the high-tech idiots like me tend to surround themselves at these times. It includes the laptop, plus one of two 2 terabyte portable hard drives I have which contain most of our life hitherto, in the sense of most files from the desktop back home. I’m also backing up all of the images I’m making on this trip, plus the contents of the supposedly interesting blog in which you are reading these words. The blog and images actually reside in my web site, elfram.com, which is somewhere in an air-conditioned, backed up, secure data farm (rooms full of disk units) in Sydney, or perhaps Melbourne now, as I (that is, myself as a customer paying to be hosted somewhere) have been bought and sold several times, amongst 4 different firms. 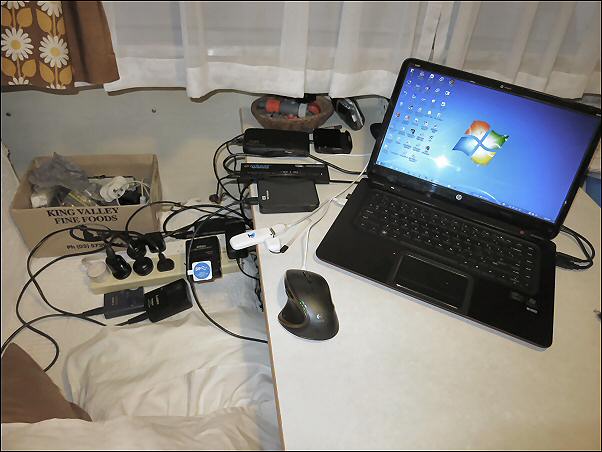