Readers must understand that in accord with established tradition, this post-prandial research report was delivered on the occasion of the Christmas Dinner, 1987, attended by all of the staff of the Department of Applied Chemistry, Royal Melbourne Institute of Technology, in which place I had the honour of occupying the post of Senior Lecturer in Organic Chemistry (1975-1988).

These occasions were characterized by their irreverently festive atmosphere and the delivery of humorous poems, songs and talks with topical and local allusions. I suspect that these days they would possibly breach the regulations associated with sexual harrassment!

Now, I know that some of you have been wondering what sort of research project I have been pursuing since my last lecture in this place. Or, it might have been elsewhere, because my memory of that particular Chemistry Christmas Dinner seem to have faded over time.

I suppose that was a result of the highly stimulating intellectual atmosphere which always obtains at our seasonal festivities. In my case, the atmosphere must have been so stimulating that I recalled nothing at all after the Christmas Pudding and gourmet flummery.

In ensuing months I did do some potentially ground-breaking research which led us to believe that molecules are actually sentient forms of life. However, about the same time as I released some of my early results to the tabloid press (a ploy now used by the best of research teams), I became the innocent target of a nefarious gang of activists, associated with Animal Liberation, who broke into my laboratory over the weekend, and liberated all my research molecules by pouring them down the sink.

This will be cruelly counterproductive because they were nowhere at all ready for release into the wild, and I fear for them: they were not yet ready to fend for themselves, and would have great difficulty in establishing their own territorial boundaries. I had become quite fond of some of them, ... and they of me.

However, I do have some exciting news to report. In parallel with my research into molecular sentience, I wish to announce a breakthrough: my observations lead me to the inescapable conclusion that there exist, in nature, molecular structures which have sex.

Not as such, let me hasten to add - although there are ongoing investigations along those lines, but in respect of the fact that I propose the existence of both male and female versions of molecules which can be differed with regard to gender, as our feminist sisters (I use the term advisedly) prefer to call them, although being rather old-fashioned, I, personally, when all is said and done, prefer to relegate that particular word to uses in grammatical construction. Call me old-fashioned!

So, if you are still with me, I would like to engage in an erudite elucidation regarding the above-mentioned entities, namely: Male and Female Molecules.

For purposes of brevity, I will give full details of the revolutionary method of Fourier Transform Gas Chromatography elsewhere. Suffice it to say that by dint of much lateral thinking and much hard work on envelope-pushing techniques, we achieved our goal of separating molecules which, taken individually, are of the opposite gender persuasion. Here, then, are the results. 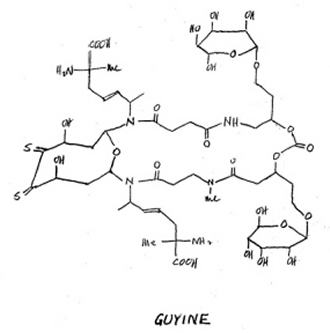 After extensive analysis using the very latest technologies, we detected a further detail of structure which is very enlightening. Hence, from a more sophisticated viewpoint, the molecules of Guyine and Dolline are, for many purposes, best shown as below.

It should be apparent to even the most cretinous (no offence) of you which is which. If you have any difficulty with this point, I will be glad to show everything I have to you all after I finish the lecture - preferably following the breaching of the traditional cardboard cask of vintage port and chocolates. And cheezels. 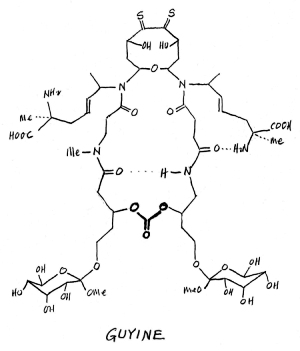 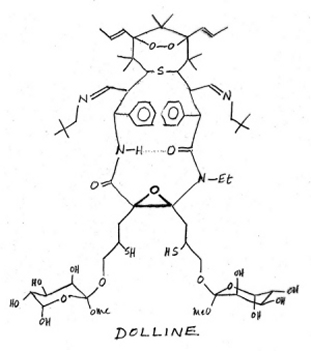 It will be immediately obvious that the female molecule, Dolline, is far more complex than the Guyine, which is the male molecule. Now, this is not exactly counter-intuitive. It both stands to reason and can be expected to have been the extant state of affairs in common-sense parlance. I will say no more on that matter if I know what's good for me.

The female molecule is more unstable than the the male molecule; that is, the Dolline molecule tends to go to pieces when exposed to great warmth. This weakness tends to be concentrated at the three-membered oxirane ring situated in the lower centre of the structure.

This is a fact which will have been screamingly obvious to the organic chemists in the audience, but for the less privileged other ranks among you here I thought it was only fair to clarify that aspect. Listen and learn!

Of peripheral significance is the existence of two left hands on the male and two right feet on the female. The significance of this remains to be discovered. One can but conjecture silently, and I'm sure that's exactly what you will all do. In fact I can hear you right now ...............

Without doubt, the primary functional group of the male molecule is the carbonate group, located, analogously, at the lower center of the Guyine molecule. This particular group can undergo differing hydrogen-bonding states wherein it can adopt axial or equatorial conformations, depending upon the proximity of a nearby female Dolline molecule. We call these states the erecto- and the flacco- conformations of Guyine.

5. The central ring in the female.

The primary functional group of the Dolline is undubitably, and without doubt, the centrally placed epoxy group, also called the oxirane structure. I prefer the former term because it has a better ring to it.

We are unsure of the mechanism of the interaction of the carbonate (Guyine) and epoxy (Dolline) moieties, but we have noticed that the female molecule can protect itself (herself?) from unwanted attack by the male molecule by means of steric hindrance.

Looking closely, you will see that the sulfhydryl groups (-SH) at the what for want of a better name we will call the kneecaps can be oxidized to a disulfide group (-S-S-) thus firmly locking the lower limbic appendages together henceforth causing the Guyine's operative functionality to adopt the flacco-conformation.

The steric hindrance exhibited by the Dolline is reduced by the action of ethanol, and this loss of hindrance is catalytically amplified by metallic silver or gold. Moreover, polycrystalline tetrahedral carbon has a remarkable and dramatic effect - when that appears no holds are barred.

Interaction between Guyine and Dolline can occur unpredictably. An intensely excited transition state complex eventuates, but of uncertain half-life, followed by a sudden relaxation to the ground state.

There is a difference in the selectivity of the two molecular genders. Guyine is rather unselective in its interactions, unlike the more selective Dolline. Guyine will react indiscriminately with any neighbouring Dolline.

10. Edgacules: a novel temporary peripheral disintegration in the male.

There is even evidence of interaction-at-a-distance whereby the Guyine alone can enter into an excited state until a part of the edge of the molecule comes off. I have called this part of the molecule the edg-ac-ule, from the word "edg" + "ac" (Gk:sharp) + "ule"(Gk diminutive).

Note: This minor molecular emission is termed an "edgaculation".

A sizable proportion of the total population of Guyine molecules will readily interact with another Guyine molecule. This homomolecular reaction has only just become evident, and we currently believe that it is facilitated by a rubber membrane.

Footnote: In conclusion, let me say that this seminal work is ongoing and we are currently seeking extra funding for this exciting sphere of endeavour, but unless this is forthcoming, I fear that this stimulating chemical horizon is doomed to be but a sunset industry.

If you are a poor benighted soul who knows no organic chemistry, do not take this talk seriously! If you do, may the Great Molecule have mercy on your soul!